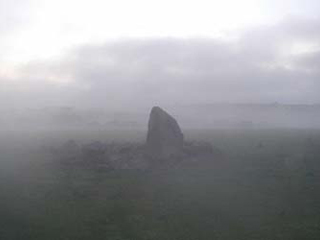 As a family we have farmed at South Penquite since 1977. In 1986 we purchased a field know locally as Ryedown on which there stands an impressive standing stone. My late father who took a keen interest in all things spiritual was intrigued by this ancient monument that had been all but written off in the archeological surveys of the time

The next year one of Cornwall most famous dowsers – Donovan Wilkins – came to the farm to dowse around the farm-yard to find a suitable spot to drill a bore hole. A fascinating man, he was an expert dowser and his sighting of the bore hole was entirely accurate even down to telling us on the day at which depth we would find water and how many litres per hour we could expect! Fortunately, at the end of the day, father had the foresight to walk him down to Ryedown to take a look at the stone

He was mightily impressed by the stone and hinted that it probably marked a ley line and talk of far off places like Avebury and Glastonbury. I had never quite believed this and so this summer I came up with my own theory which would connect the stone, along with many other similar objects on the moor, to the summer solstice… 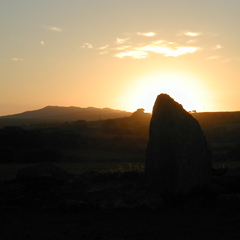 So at 3.45 am on the 21st June 2001 I was to be found (camera in hand) shivering next to the Ryedown stone with only a few Galloway cows for company. Here is one of the series of pictures I shot and as you can see my theory of alignment between the sun, the stone and Cornwall’s highest point (the hill Brown Willy) didn’t quite happen

Was this down to the passage of time or was my theory wrong?…later in the summer a friend of mine who takes a keen interest in such things introduced me (and the stone) to another famous dowser. Hamish Miller has dowsed lines from Ireland to Jerusalem and written a book about his adventures dowsing the St Michael and Mary lines from the tip of Cornwall, through Glastonbury to the East coast of England

He liked the Ryedown Stone…he liked it alot. He said it marked a very strong line and had the potential to heal. He tentatively suggested to me that it would be part of my life from now on to bring people to the stone to make people aware of it’s healing powers