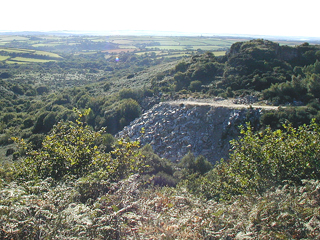 South Penquite Farm lies on a plateau between 200 and 220 m above mean sea level, on Bodmin Moor, with steep slopes down to the De Lank River on the south-west side. There is very little rock definitely exposed in situ but what there is is granite and rhyolite (called ‘elvan’ in Cornwall), and thus the visible geology matches closely what is well seen in the adjacent active De Lank Quarry which produces dimension stone, and has in the past also produced crushed rock (‘aggregate’) of both granite and rhyolite. Two ‘slot’ quarries in rhyolite dykes and a broader quarry in granite, and minor workings, have been cut in this SW facing slope

The slope also has a good spread of clitter – loose blocks of rock – and most of these are probably part of a fossil landscape dating from the Ice Age (in summer in glacial periods the top surface of the permafrost would have melted and blocks slid under gravity). Some may be the result of small scale quarrying 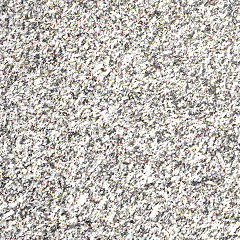 Some of the fields too have a cover of loose boulders, but most of the fields have been cleared. These boulders are the remains of granite that was more resistant to weathering, and are thus analogous to tors. Some could be called core-stones, and in a few places good granite can be seen at surface immediately adjacent. As many large boulders have been moved by machinery it is impossible to state which are still in place

In places too the boulders, and granite at surface, have been worked using feathers and tares to split off pieces – presumably for gateposts and lintels. Indeed, one granite gatepost is very obviously an up-ended piece of cheesewring tor, with characteristic curved upper surface