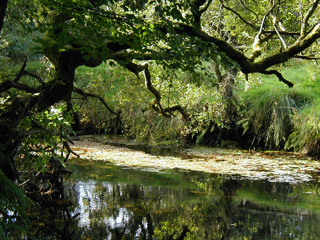 Cornwall’s watery treasures and are largely a product of the county’s geology and mild wet climate. The wild tor topped heights of Bodmin Moor, with its extensive areas of peat bog and clear feeder streams, is the source of many of the county’s principal rivers such as the Fowey, Camel and De Lank, as well as the Ottery, Inny and Lynher which flow into the Tamar

The River De Lank which forms the boundary of the farm for nearly a mile is a tributary of the river Camel which goes on through Bodmin and Wadebridge to the Atlantic Ocean at the North coast sites of Padstow and Rock. The source is high up on the Northern slopes of Brown Willy (Cornwall’s highest hill) not very far from the source of the river Fowey which runs off its Southern side

The De Lank River features some of the most pristine habitats in Cornwall with outstanding water quality and a wealth of wildlife. Its surrounding banks, woodlands and marshes has been designated a Site of Special Scientific Interest (SSSI) and a Special Area of Conservation (SAC) because it contains plant, animal or insect life that is threatened or rare throughout Europe 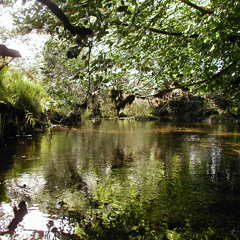 Many rare species of plant and animal life are found in and around the River including Mink, Otters, Kingfishers and scarce greater and lesser Horseshoe bats as well as many fish species including the very rare Bullhead fish

The plant life includes over 70 separate species which is very unusual in an upland, nutrient poor river. The marsh violet and the rare Cornish moneywort can be found along the river bank

The river area is also rich in insects. Nationally scarce species include the water beetle and the meniscus midgemayflies, and the presence of caddis fly indicates a healthy ecosystem

The River Camel and De Lank are an important stronghold for the otter one of Britain’s rarest and shyest mammals. Otters are regularly seen and travel the whole length of the river in their search for food, eels being their favourite prey. ‘Tarka’ the name given by Henry Williamson to the otter in his book of the same name means little wanderer. Indeed otters may travel 20 kilometres or more in a night

To cross from the North coast to the South coast otters will often use the river De Lank moving upriver until they find themselves at the source near the moors highest point at Brown Willy. From here it is a matter of crossing a couple of treacherous peat bogs and a short piece of open moorland of a few hundred metres taking them over the hill into the next catchment the source of the River Fowey.